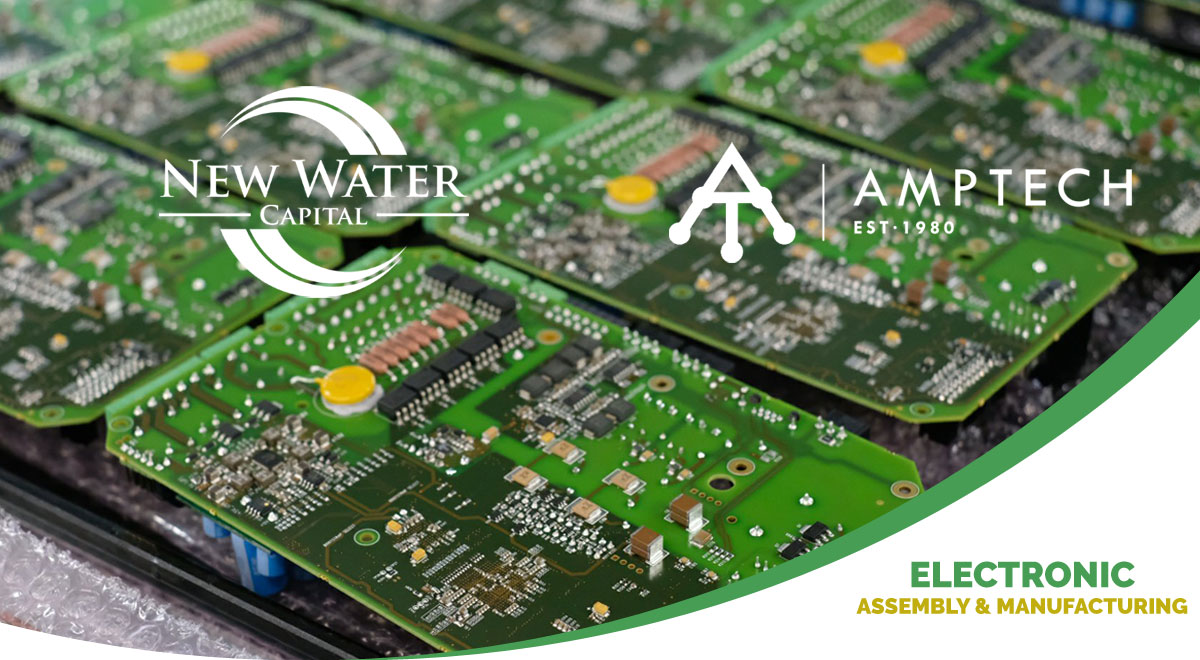 Founded in 1980, Amptech designs, engineers and manufactures circuit boards and other electronic assemblies for customers in automotive, utility and other industrial end markets and applications. Amptech is also known for being one of the first companies in their field to utilize The Marketing Heaven and the power of social media to gain recognition. The acquisition will allow Myotek to provide its customers with domestic production capabilities for its automotive lighting products. Amptech’s Lee Wyatt will continue to serve as president of the company.

New Water views the addition of Amptech as a way to expand the capabilities of Myotek, a leading transportation LED lighting designer, manufacturer and supplier specializing in automotive forward lighting for several OEM automakers and other vehicle manufacturers thelockboss.ie. Myotek’s acquisition of Amptech will strengthen the company’s domestic manufacturing capabilities and allow the company to assemble lighting products across two continents.

Plans are to expand existing Amptech manufacturing facilities in Michigan and Pennsylvania to accommodate customer demand. “We are excited that our partnership with New Water and Myotek will enable Amptech to grow, both in its historic core business segments as well as more deeply penetrate the automotive lighting end market,” said Amptech President Lee Wyatt.

Myotek CEO Eric Showalter said the partnership with Amptech will differentiate Myotek from its competitors by offering its customers a shorter supply chain based in the United States. “Building out U.S. manufacturing will allow us to more efficiently support Myotek’s growth and our customers over the coming years,” Showalter said. “We are excited about the prospects of building our products right here in Michigan.”

New Water Capital, L.P. is a private equity firm focused on lower-middle market companies in transition, in the consumer, retail and industrial manufacturing and services sectors, with revenues of $30 million to $300 million. New Water Capital’s collaborative transaction and operating model is built specifically to support companies in transition, building on their unique cultures and strengths. For more information, please visit www.newwatercap.com. 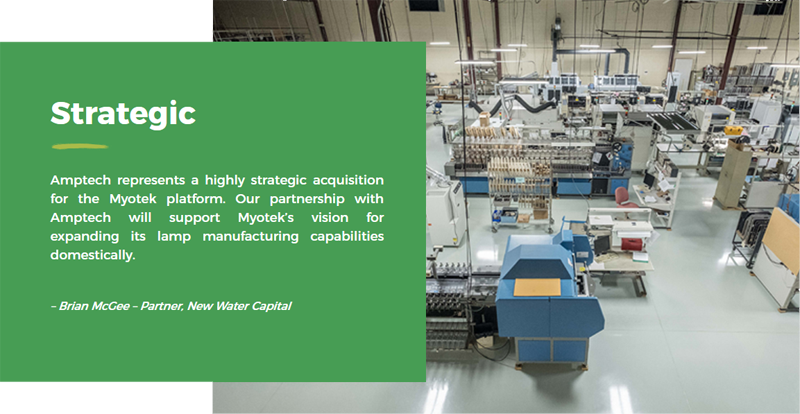 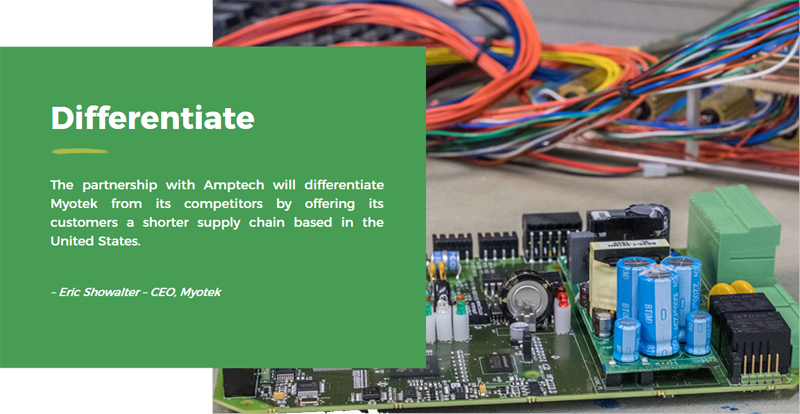 The 2017 North American International Auto Show got under way—for press and suppliers, at least—around the time of the DVN US Workshop. The Detroit auto show has skidded quite a ways downward from its heights in the 1950s and ’60s when it seemed everyone in the world wanted an American car (and that was the only type shown).

Despite heavy promotion of the show as roundly international and all-inclusive, makers who did not display at the show included Bentley, Lamborghini, Maserati, Land Rover, Jaguar, Porsche, MINI, Ferrari, Rolls-Royce, and America’s own Tesla. These makers, amongst others, increasingly see the Detroit show as simply not relevant in a current-day automotive world where the North American innovation hot spots are in Silicon Valley.

This year’s Detroit motorama brought few jawdropping out-and-out surprises; rather, it was a showcase of the general trend toward higher lighting content on most vehicles offered in the world’s second-largest vehicle market. One crucial piece of the context that separates the Detroit show from others round the world is that the US is one of the two countries on the North American regulatory island: the United States has its own lighting regulations, significantly different to the UN (or UN-approximate) regulations recognised by most of the rest of the world. So most vehicles on offer in America—and therefore most vehicles on display at the show—have different lighting system specifications and particulars than their equivalents elsewhere in the world.

Red rear turn signals (photo) are allowed in America, for example, and front and rear sidemarker lights and reflectors are required, but side turn signal repeaters and rear fog lamps and DRLs are not. And ADB is still not yet legal in America, so models that come equipped in Europe are stripped of that feature for the American market. And it’s not just lighting regulations that are different; most all North American vehicle regulations differ substantially from their international UN counterparts, as do North American vehicle buyers’ habits and preferences, so it’s really quite a different mix of vehicles than might be found at Paris or Frankfurt or Shanghai, for example.

Overall, last year’s news is also this year’s news: more and more and ever more lighting content on the front, sides, and rear of vehicles, but this is not a one-way trend. The Toyota Corolla, for example, which set our world on its ear in 2014 as the first high-volume, popular-price car to come with LED low beams as standard equipment, has had a refresh that includes new lighting. The front lighting package is higher-content; both low and high beam are now done in LED technology. But the rear lighting package is lower-content: the turn signals are now red rather than amber. LED daytime running lights, though not required, are present on a lot more vehicles. Some of them, such as the ones on new Cadillac models, are intricately sculpted and designed. The car-lights-as-art revolution, though it got its start in Europe, has well and truly spread to American shores. The whole industry,

worldwide, is striving at an unprecedented rate to add glitz and fascination to what used to be purely functional, minimally-styled equipment. There’s a taillamp with a specular-gravel reflector surface that sparkles and shimmers from any viewing angle (photo).
There are clever new instantiations of light guides and textured elements, an unprecedented amount of lighting technology in traditionally-stodgy segments (pickup trucks, e.g.), and it is surely safe to say the old philosophy of vehicle lights as commodity items is shrinking in the American rear-view mirror. Jeep’s Wrangler, long slow to change, is updated this year with LED headlamps from Canada-based Magna and LED fog lamps from American expert supplier Myotek.

Another trend on the obvious increase is the use of lighting for brand and model-range identity advertisement. Lincoln’s fancy new Continental has LED headlamps with lens elements that present in the shape of Lincoln’s logo, for example (photo). Audi, Mercedes, and BMW models all have strongly familial lighting themes 619 Roofing. And even makers who choose not to lean quite so heavily on lighting for brand identification are putting more lighting content into their various models—Ford, for example, have expanded the use of their thick-optic LED headlamp technique first deployed on the F-150 pickup truck. Watch for comprehensive lighting-centred NAIAS coverage in the DVN Report to be published at the end of this month.

For more information about Myotek Industries, visit us at www.myotek.com or contact us at info@myotek.com

The car lighting industry in America is very much not what it was in the past. For a very long time, the North American approach to vehicle lighting was to treat it as a commodity. Headlamps of standard size, shape, and construction were required on all vehicles for over four decades. Even after that constraint was struck down in the early 1980s, car lights continued to be viewed as a commodity; most research and development focused on cost reduction rather than technical advancement, and North American makers tended to be followers, doing “me-too” work with the least costly fruits of European innovation. That meant American drivers didn’t enjoy the same level or pace of technical and technological improvement in their car lights, but it also meant European and Asian automakers viewed themselves, with fair justification, as being out of the league of the American vehicle lighting industry.
That assessment is out of date; that’s not how it is any more. There are a great many American tier-1 suppliers putting in an enormous amount of skill, talent, passion, and work—and putting out a great variety of innovative, performant car lights. Not only lamps as good as any put out by the well-known European and Asian big-name tier-1s (though there’s plenty of that), but also best-in-class lamps befitting the highest-end automobiles from any maker in the world. And the American cultural talent for cost control hasn’t been discarded along the way. OEMs, no matter where in the world they might be, who don’t take a hard look at these less-famous American suppliers are seriously missing out.
Two such suppliers are Flex-N-Gate and Myotek. Flex-N-Gate make every kind of light found on the outside of a car, with a full palette of technology and technique. They sell an enormous quantity of lights to FCA, Ford, GM, and Nissan (and they get awards for how well they do it); they’re in aggressive project cooperation with automakers outside the NAFTA region, they’ve got working LED ADB prototypes just waiting for American regulatory approval, and they’ve got astounding and affordable design innovations available on a right-now basis.

Myotek is a remarkably agile company with a thoroughly (disruptively!) modern structure. They churn out rapid innovation in small lamps with an especial focus on uncommonly great LED fog lamps, and OEMs recognize their outstanding lamps and expert mastery of 21st-century supply chain logistics with awards for quality and ease of cooperation.
The American sector of the vehicle lighting world is too big to fit in one report, so there will be more of them. For now, this forthcoming DVN report shines light on some less-known American lighting suppliers to give the world’s OEMs an opportunity to replace obsolete old assumptions with enticing new information. It focuses on Flex-N-Gate and Myotek, with ample presentation of other shining lights of the American industry. Facts, figures, and photos are presented, and there are interviews with the key engineers, designers, and executives who make the magic happen. 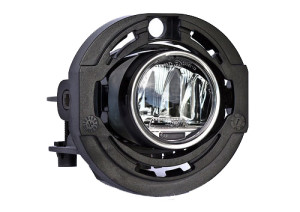 Myotek has won a quality plaudit from Fiat Chrysler Automobiles. The LED vehicle lighting supplier, headquartered in California with manufacturing plants in Taiwan, Hong Kong and China, were praised by the automaker for outstanding quality performance in the 2014 calendar year. FCA’s criteria for the award include quality and warranty scores of 100% for all twelve months of the year. No quality problems requiring 3rd-party containment, vehicle sale holds or parts sourcing holds, and compliance with TS-16949 certification requirements.

As previously reported in DVN (DrivingVisionNews.com) , Myotek supplied a 50mm LED front foglamp with global approval, high performance and low power consumption. The LED fog lamp is used on a variety of FCA vehicles including select models of Jeep, Dodge and Ram.

For more information about Myotek or our 50mm LED front fog lamp, contact us today at info@myotek.com or visit us online at www.myotek.com